You are here: Home / About me 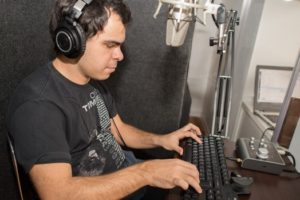 I was born in Rome from a Sicilian mother and marchigian father. Since the early years of my life I have shown a great passion for music and for everything that goes around it, a passion fueled by my perfect pitch that allows me to recognize even the multifrequency of telephones and by the blindness that afflicts me since birth, which probably led me to have more developed hearing than the sighted people.

The passion for radio was born with “Canta tu“: I had the second model, the one that allowed to lower the volume of the cassette players with a slider and keep the microphone volume louder. Every day I spent a lot of time by Channel surfing in the Roman ether, until I found Radio In 101 … where I broadcast my first live show at just 11 years old.

I used that Canta tu until I destroyed it, then I discovered web radios. I founded one, I managed it together with other people for a couple of years and then I left, due to a series of circumstances and because I was surrounded by by people who were probably everything but friends. In the future, I will return to broadcast on that station, but with very short and fluctuating collaborations.

After the web radio it was the turn of Radio Antenna Febea and its former director Nello Surace, who put me in charge of a chart on Saturday at 9pm. The Pop Line Chart lasted for some time, then he set me up to run Crazy Together in the morning.

From there it was a succession of shows on new radios, a set of texts for commercials, jingles, station ID’s.

THE ACTIVITIES OF A PROFESSIONAL VOICE TALENT

I am a professional italian voice talent and a radio host since 2005.
In these years I have passionately recorded any type of project that required a professional use of my voice, from commercials to corporate videos and radio shows.

In the first commercial I was a boy enthusiastic about a course for voice talents, ready to say “It works! Now … I’m on the air!”. Only a few months later I was recording my first commercial for a regional radio (Radio Number One), for which I still record, and a few years later I was part of the first national spot made for Smile Train Italia, an association that helps children find their smile again. The spot was aired on Radio Deejay, Virgin Radio, RMC and Radio Capital.
Thanks to improvements in technique and expressiveness, over time I continue to receive confirmations and I produce voiceovers, company presentations and training courses for Swatch, Castrol, Amazon, Star and other international level brands.

In addition to advertising, one of my biggest passions is already 90 years old, and it’s called radio.
I took my first steps in radio broadcasting by producing radio shows recorded for Fm Radios all over Italy.

Sabato Sprint and Cocktail Magazine are still on the air respectively on Radio Onda Libera (in the province of Rome) and on Radio Arbereshe International (in Calabria).
Between 2009 and 2011 I Hosted several shows on Radio Cassino Stereo, Radio Splash (where I broadcast for 5 years) and many other local and web realities.

Radio is certainly my biggest passion, but it is not the only one. Ever since I discovered I had perfect pitch since I was a child, I started playing the piano and singing, in the last period I also wrote my own music. In addition I have been using the PC for about 9 years for personal needs , and so computer science has become one of my interests (many people like to call me a “freak”). It didn’t take me much time to apply computer science to the radio field, In fact I started to use my computer for audio editing (you cannot imagine the joy of my parents and friends in seeing me grow and become more and more passionate, but also in listening to parts of songs at a volume that was definitely overkill!).

Since I am on the subject, although perhaps it is not very professional, I want to take this opportunity to thank my parents and all those people who have helped me and still do to cultivate my passions. A heartfelt thanks!